In the world of digital product creation and development, the Minimum Viable Product is turning twenty. The term MVP was created in 2001 and popularized by Steve Blank and Eric Ries to define the minimum version of a product that has enough resources to be used by the first users in order to gather feedback for its development.

Since then, the concept has evolved and has been the subject of many discussions among technology enthusiasts. After all, does the minimum version of a digital product necessarily need to have code? If you can test a business model with a No-Code initiative, is that a Minimum Viable Product? Can MVPs be used by any business?

In order to clarify this debate, in this article, we will share some currents of thought on the subject. It is important to emphasize, however, that there is no presumption of closing this debate here, nor of consolidating concepts; but rather to contribute to the area by bringing different perspectives.

The minimum version of a new digital product

Frank Robinson was the creator of the term Minimum Viable Product (2001), defining it as a unique product that maximizes the return on risk, both for the customer and for the supplier. To the CEO of SyncDev (formalized and streamlined process for the development of new products, markets and businesses) the MVP solves a series of problems in the first launch of a digital product, as it ensures that it has the necessary resources – and only these resources – to go to the market to be tested by its first users.

It’s the idea that a product that is too small or too large is problematic. In the first case, imagine a system for delivering test results to people, without a user identification (login) functionality, for example. In the second, think of a transportation app where, in addition to requesting a car to travel a certain route, you can also choose the song that will be playing on that car’s radio.

A product with many features reduces the return on investment and increases risk. In addition to taking a long time to be ready, once launched, it can generate rework, need for corrections, increase in staff, complexity, etc. All of this, obviously, generates higher costs and dissatisfaction, both for the team and for the customers.

In this first definition of a MVP, we can deduce that the concept refers to a digital product with some level of code, which has already been partially developed to go to the market. It represents a change in mindset, in which it is no longer appropriate to build a complete product and then launch it on the market; but rather develop a minimal version to test the idea and its first features. 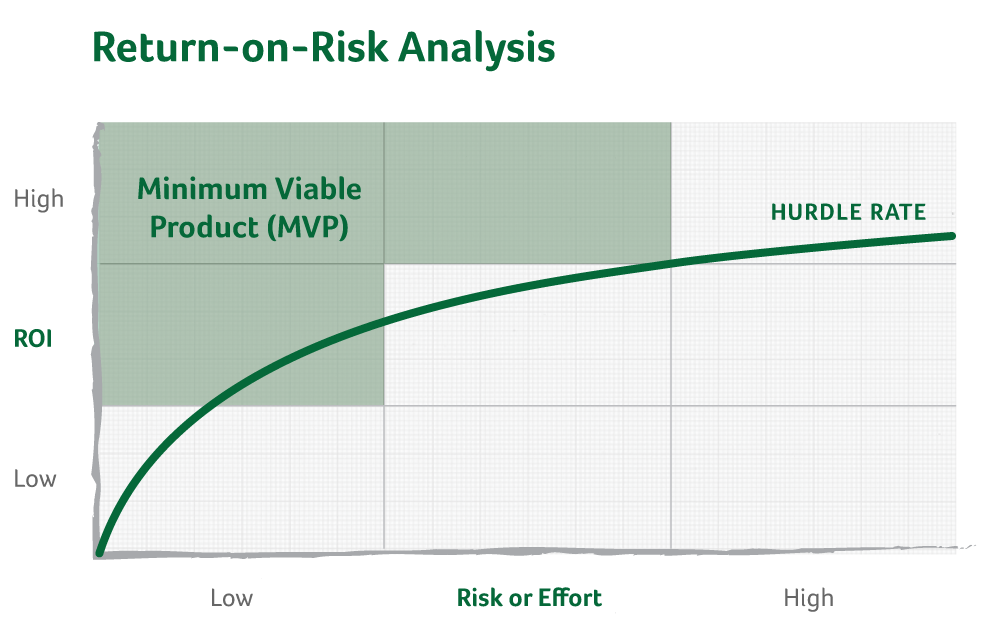 The MVP is the product with the highest Return on Investment (ROI), and the lowest risk or effort. Source: http://www.syncdev.com/

Now imagine the following: you have a restaurant and, due to the Covid-19 pandemic, you had the idea of creating an application that works as an online menu. Through it, people can see the meals you offer and place orders at the tables using their own cell phone, thus avoiding contact with waiters or physical menus. This same app can be used for delivery orders and therefore you concentrate all your services on a single platform.

However, will people enjoy ordering through the app? Or do they prefer to talk to a waiter with questions about their meals? Wouldn’t it be more fitting to collaborate with an app like iFood or Uber Eats, rather than having your own delivery platform?

Before investing in application development, it is advisable to test your product idea (your hypothesis) with a No-Code initiative: on the restaurant tables, you can provide a QR Code informing customers that they will be able to find the menu online. This QR Code is connected to a landing page that collects orders through a form. At the tables, you can also have a button available if the customer prefers to be served by a person.

For a few months, you then analyze the data generated by this test. How many people placed the order through the landing page? How many preferred to be serviced by a waiter? Which of the two options generated more sales? Which one generated the most profit?

In the concept where the Minimum Viable Product is the minimum thing you can build that delivers value to the user and captures value for decision-making, the example we saw above can be considered an MVP, even without the development of the software itself. It is the first version of a hypothetical new product that, after entering the market, will be developed to reach the desired state, or will be abandoned if users do not use it – or consider it useless. According to Eric Ries, in the book The Lean Startup, “when considering the construction of your Minimum Viable Product, remove any resource, process or effort that does not directly contribute to the learning you seek”. 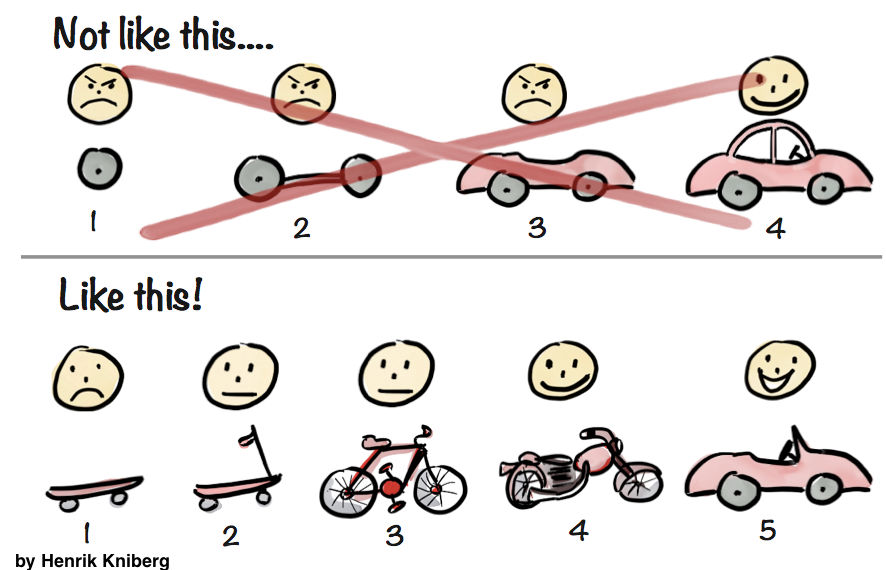 A wheel has no value to the customer. A skateboard is not a car, but it has value as it serves as a means of transportation. Source: https://www.interaction-design.org/

A wheel has no value to the customer. A skateboard is not a car, but it has value as it serves as a means of transportation. Source: https://www.interaction-design.org/

While for the original author of the term MVP, Frank Robinson, the idea was to maximize Return on Investment (ROI), for Eric Ries the important thing is to maximize learning. This second vision was responsible for opening possibilities for lighter experiments such as landing pages, concierges, etc.

A minimum and qualified product

What if you understand that your user does not want the minimum, but the highest quality possible? Critics of the Minimum Viable Product claim that launching an incomplete product can hurt a company or brand, generating negative feedback and a feeling of neglect on the part of users. There are also those who say that with the MVP in the market, competitors may copy and imitate the new product and be more agile in development.

First, there is a problem with understanding when we contrast MVP with quality. The idea of a minimum product does not mean a bad product. Just think of large companies that use this concept, such as Google, Apple, Facebook, and Netflix. If we think about the latter, we can remember that its first version as a streaming service offered a reduced number of movies and series; and, with the learning achieved with the first users, the catalog gained new titles, responding to customers’ consumption habits. After all, including hundreds of horror movies at the beginning, for example, would only be a waste of money if consumers liked comedy best, right?

Secondly, the fear of imitation is unfounded in today’s market. Firstly, because, yes, if you create an innovative digital product and provoke a disruption in the market, your days without competitors are numbered. Other companies will create similar products and compete with you for consumers – soon the ocean will no longer be blue. However, if you launch an MVP and, based on the lessons learned, generate new, more suitable versions that gradually deliver more value to your user, you will definitely be ahead. Whoever delivers a complete product to the market, will take more time, spend more money, and may fail with less or more features than ideal.

In this sense, at SoftDesign we believe that for the creation of any digital product, for a startup or consolidated company, be it an application, system, or platform, the MVP is the best option. We use agile methods to support this concept, running a first Discovery Cycle prior to development – Product Conception – and running it continuously throughout Development, while the Delivery Cycles are executed. This way, we test hypotheses, gather feedback, analyze data and implement improvements.

It is only a Minimum Viable Product if…

In its first development release, be it Low-Code or No-Code, the essential is for the MVP to be a mechanism that meets a series of objectives:

In addition, it is important to remember that the MVP must have three fundamental characteristics:

Need help developing your MVP? Fill in the form below, we will contact you!

Ideas or feedback? Get in touch with [email protected]

The Structure and Roles of a Product Team


Have you ever thought about how a product team is composed? When the need to create a digital solution arises, be it an app or a platform , many people immediately think about hiring a programmer. But is that where it all starts? Are there other professionals essential in the construction of digital products? What… Leia mais »

Total Experience: How To Ensure The Best Experience


Integrating the experiences of customers, users and employees is the main objective of Total Experience. This technology trend was present in the 2021 and 2022 Gartner reports, and the need to understand its benefits and applications is increasingly clear. Business strategy helps accelerate business growth by managing the experiences of multiple stakeholders, generating greater trust,… Leia mais »